ALEXANDRIA, Va., July 12, 2018 /PRNewswire-USNewswire/ -- While Americans are collectively checking their phones more than 8 billion times a day, a new industry report shows that they are increasingly fishing for actual fish (instead of just likes and follows). More than 49 million Americans took to the water to cast a line in 2017, demonstrating a year-over-year increase of nearly 2 million anglers according to the Recreational Boating & Fishing Foundation's (RBFF) 2018 Special Report on Fishing. 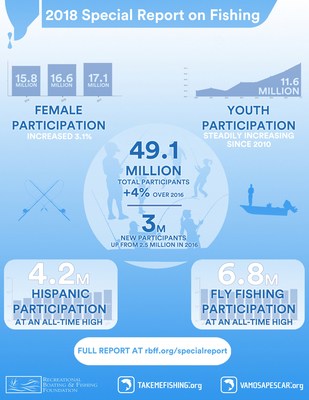 "These are exciting figures that reflect the sustained growth in our industry," said RBFF President and CEO Frank Peterson. "Getting more Americans to spend time outdoors is a crucial part of protecting our natural resources for future generations. Anglers and boaters help protect our natural aquatic places and the wildlife that lives there through fishing licenses, boat registrations, fishing gear, boat fuel sales and much more."

Created in partnership with The Outdoor Foundation, the Special Report on Fishing provides one of the most comprehensive looks at the state of U.S. fishing and boating participation. Key findings from the 2018 report include:

"It's clear fishing continues to be a pillar of America's thriving outdoor culture," said Ivan Levin, deputy director of The Outdoor Foundation. "This is good news for the greater outdoor industry, as fishing is known to inspire people to try other outdoor activities."

The full report, along with an accompanying infographic, is available at the RBFF Resource Center.

About the Recreational Boating & Fishing Foundation (RBFF)
RBFF is a nonprofit organization whose mission is to increase participation in recreational angling and boating, thereby protecting and restoring the nation's aquatic natural resources. RBFF's recently announced 60-in-60 effort strives to attract 60 million anglers to the sport by the end of 2021. To help recruit, retain and reactivate participants, RBFF developed the award-winning Take Me Fishing™ and Vamos A Pescar™ campaigns creating awareness about boating, fishing and conservation, and educating people about the benefits of participation. These campaigns help boaters and anglers of all ages and experience levels learn, plan and equip for a day on the water. The campaign websites, TakeMeFishing.org and VamosAPescar.org, feature how-to videos, information on how to get a fishing license and boat registration, and an interactive state-by-state map that allows visitors to find local boating and fishing spots.

About The Outdoor Foundation
The Outdoor Foundation is a not-for-profit organization dedicated to inspiring and growing future generations of outdoor enthusiasts. Through groundbreaking research, action-oriented outreach and education programs, the Foundation works with partners to mobilize a major cultural shift that leads all Americans to the great outdoors. In 2010, the Foundation launched Outdoor Nation, a pioneering initiative that aims to empower young leaders to champion the outdoors on campuses and in communities across the United States. For more information visit:OutdoorFoundation.org and OutdoorNation.org.